Back to Articles | « Previous | Next »
Home » 2019 State of the Climate Report: Peak greenhouse gases and record heat 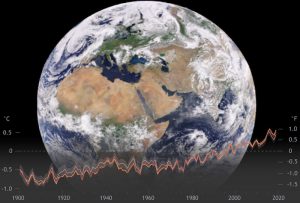 2019 ranks among the 3 warmest years in records dating to the mid-1800s. In 2019, greenhouse gases reached their highest levels on record. Both facts are from the 30th annual State of the Climate report, a review of world climate based on contributions from more than 520 scientists in over 60 countries.

On August 12, 2020, the American Meteorological Society released State of the Climate Report for 2019. An international, peer-reviewed publication released each summer, the State of the Climate Report is a review of the world’s climate, based on contributions from more than 520 scientists in over 60 countries. It offers insight on global climate indicators, extreme weather events and other environmental data.

The 2019 report is the 30th annual such report. According to it, in 2019, climate records were, once more, either challenged or broken. 2019 now ranks among the world’s three hottest years. What’s more, greenhouse gases peaked in 2019 to their highest levels on record. Plus, the six warmest years on record have all occurred in the past six years, since 2014.

The State of the Climate report is led by scientists from NOAA’s National Centers for Environmental Information and published by the Bulletin of the American Meteorological Society.

Copyrights of the Climate News articles belong to the respective Media Channels.
This Climate News portal is non-profit and politically non-dependent forwarding readers to The Current Global Climate News